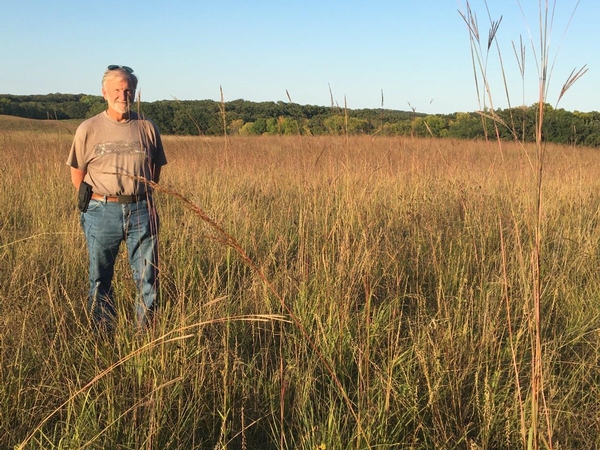 But Brutlag chose instead to place 129 acres of his Eagle Lake Township farm into a perpetual easement through a state and federal partnership. Seven years later and six years after seeding, yellow, lavender and pink wildflowers bloom among native grasses in the restored wetland and prairie.

“This project was one of many wetland restoration projects done under the RIM-WRP partnership,” said BWSR Executive Director John Jaschke. “It brought the best of both programs to one place: It allowed us to achieve permanent wetland restoration and prairie with both state and federal funding.”

Brutlag said the native plants that now flourish in the restored wetland and prairie help make the property look as he imagines it did when his family  homesteaded the land in the 1860s.

“It was very fitting to convert this land back to its natural habitat,” Brutlag said. “From a family perspective, we decided that was equally as important as using it for a developmental project.”

After the easement was recorded, with Brutlag’s strong support, the RIM-WRP payments were used in fall 2011 to restore 13 previously drained wetland basins. BWSR staff designed the wetland restoration and helped with project oversight. An NRCS soil scientist completed soil borings in each basin to determine how much sediment had accumulated during years of farming in the steep land. Excess sediment was removed and deposited on the surrounding hills. Removing washed-in sediment exposed the native seed bank, allowing several native wetland plants to grow. The RIM-WRP funding made it possible for Minnesota Native Landscapes to seed the area in 2012 with a mix of native plants.

Brutlag is no stranger to conservation. He served two terms as a citizen board member on BWSR’s Board of Directors from 2004-2012 and was the first Chairperson of the RIM Reserve Committee. His family's farming operation still produces sugar beets, corn, soybeans and wheat.

“Paul was an exceptional landowner to work with because he stayed involved in the process,” said John Hansel, a Ducks Unlimited contractor who assisted with the application process and coordinated restoration plans. “He really sacrificed a lot of area with development potential to make this possible.”

Brutlag said he persued the easement to enhance the natural beauty of his family's property and to benefit wildlife habitat. He also wanted to raise awareness for the RIM-WRP partnership, and show that wetland restorations could be successfully completed on hills.

“Part of the benefit and functionality and usage of RIM is to create a public awareness so people understand the value of preservation and restoration of certain types of land,” Brutlag said.